Tagged in: 28 years too late 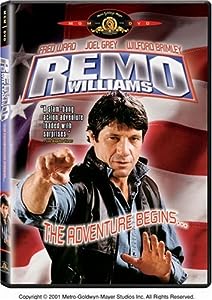 This review was written  28 years too late

Sam Makin is a washed-out New York cop and Vietnam vet who gets picked by the most secret crime-fighting organisation CURE to be remodelled, retooled, and retrained as Remo Williams – a person who can murder anyone America does not like.

His death faked and his face altered, he finds himself pretty much forced into working for CURE, where he is trained by aged Korean Chiun, Master of Sinanju. Chiun can hear the bones in a finger working when an assailant pulls a gun trigger. Wooo.

Based on the 140+ book series The Destroyer, the wealth of source material plus the bullet-dodging, water-walking gimmickry of a Sinanju-trained hero made Remo an attractive target for a Bond-like franchise. The producers knew this, and dragged in Bond alumni in the form of veteran director Guy Hamilton (four Bond movies) and writer Christopher Wood (a pair under his belt) to try and give it some foundation and legs. Sadly, both were past their prime.

(Wood, incidentally, wrote the tawdry Confessions of a…” series of books that inspired the 70s film series, which in turn led to the just-as-bad, smuttier-than-Carry-On “Adventures of a…” comedies. Interesting fact: 1975’s Adventures of a Taxi Driver outgrossed 1975’s Taxi Driver in UK cinemas†. Tenuous but curious.)

Remo has protracted training scenes where the enigmatic Chiun (Joel Grey) criticises his efforts to learn Sinanju but all the time secretly liking him. Interspersed, there’s a nonsense plot involving a dodgy arms dealer and Kate Mulgrew as the Army officer who discovers the secret, causing her to mew and simper whenever Remo shows up. She’s pathetic really.

Set-pieces include a poorly staged punch-up with some rejects from the Village People on the Statue of Liberty, a chase by a persistent Doberman, and Remo hanging off a log being transported through a forest on a cable while being shot at. Each of these is pierced by Craig Safan‘s intrusive score, trumpeting Remo’s successes with irritating fanfares of the main theme to remind you’ve just seen something, er, “spectacular”. Thanks for annoying the shit out of me.

Fred Ward doesn’t work as Remo. He’s got the tough guy smarts but, just as Chiun observes, he lacks subtlety. Ward’s prancing over wet concrete or arching his spine to duck bullets does not suggest mastery of a martial art but a campness, an exagerrated attempt at delicacy. Difficult for a man of Ward’s bulk and Remo’s machoism. Perhaps this is by design, and would have improved with sequels (oh, who am I kidding?). The producers tried, and failed, in finding Remo††.

The annoying fanfare, about one minute in here

†† A TV sequel pilot was actually made. See the “hilarious” self-aware riffing here: