>Buying a car in Denmark – the truth

A combination of new job and, er, suppressed wanting, found me in a car showroom last Sunday. Your Danish car dealership, being in a country where Saturday still counts for something (not my choice, but there you go), is open Mon-Fri plus Sunday. These hardworking salesmen need time off too.

I’d arranged to test drive a Mitsubishi Colt, one of the more affordable cars one can pick from in this land of high tax. I’d called in advance to book the test but was told it wasn’t necessary. Just bring your driving licence. So I showed up, mooched around the Colts, sat inside one and inhaled new car, then went and asked for a test drive. They photocopied my licence then handed me a set of keys. “Take the one outside,” said Leif, the grey, middle-aged seller. I walked outside, saw the car, and got in. So he wasn’t coming with me? I’d be left to my own devices? And what about guarantees, waivers, and other documentation I’d signed in England when I’d last test driven a car? Naw. No problem. Maybe I am out of touch, probably am, but this seemed a splendid idea to me. Alone, I could thrash the beast to within an inch of its life – so I did.

It responded wonderfully, throaty roar in first, sashaying through corners, almost as fast in reverse as forward. Half an hour later, I cornered back into the dealership and told Leif, “I’ll buy it.” He seemed perturbed at my decision (he didn’t know I’d done hours of research online), but then shrugged like a Finn and walked past the hospitality table (open bottles of wine for potential punters to guzzle!) and we sat at a desk. Ten minutes later, it was done. I’d bought a brand new, black Colt 1.1 Insport with three years fully comp insurance, three years pan-European breakdown cover, air conditioning as an extra, and the equivalent of £300 delivery charge for the sum of £16,000. Leif never tried to sell me credit, spoilers, fancy wheels or any other garbage. 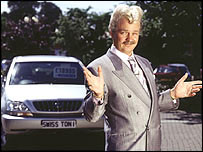 “It’s a Mitsubishi,” was about all he said, a little glumly. “It’s a good car.” I could tell it pained him to shake on the deal.

Knock off a grand for the equivalent UK fully comp insurance for three years and it works out at about £7000 more than the UK Colt. Mine has more stuff on it (I get an MP3 player and eight million speakers, air con, and refrigerated glove box – whoopee) but yes, I know, not seven grand’s worth of more stuff. They say new car tax in Denmark is 180%. Maybe it is, I can’t be arsed to calculate back to see. Point is, you won’t get around it so if you want a new motor, you pay it. You have to stop comparing.

Where am I going? A few weeks back, I asked my Danish colleagues about car taxes before I purchased. In true Danish tradition (ie, always answer with the negatives), they all launched into uninformed terror tales of the costs, the extortion, how you will never be able to afford it, and waxing lyrical about their hatred for all those low-lifes who buy cars with yellow number plates (signifying no more than two people are allowed in the car at any one time, thus qualifying for a substantial tax break). One said to me, “Put aside DKK4000 (£400) a month for a car!” Another claimed, “The weight of the car. You have to pay tax on that!” One more hollered, “The green tax! That has to be paid.” “The car bill is one we pay and don’t look at,” said the same numpty who claimed it would cost me 400 knicker a month to keep a set of wheels on the road.

I asked about road tax. “I don’t know,” they said. One didn’t even know what car she drove!

So, here for the record, is the deal with Danish new car tax as March 2008: you pay a tax on the car that’s in the quoted price of the car, that’s why they are expensive. You cannot escape it (unless you want yellow plates). Accept it. Consider it part of the purchase price. After that, you pay one tax and one tax alone and that is based on emissions. The lower the emissions, the lower the tax. (A 1.1 Colt sets you back £150 a year.) There’s no road tax like in the UK. There’s no weight tax (phased out a decade ago and replaced with emissions or green tax). There’s no 180% tax on top of the quoted price of the car. It is actually remarkable simple. Expensive, but simple.

Fuel is currently cheaper than the UK, so yah-boo-sucks to you. Think about that when you’re spending the seven grand I had to give to the Danish government. Eh? Oh.

4 Comments on ">Buying a car in Denmark – the truth"