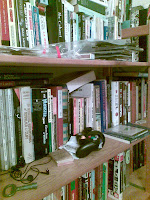 NEARLY two years after landing here in Denmark, the bulk of my possessions followed me. Three hundred DVDs, a bed, a DVD player, a tent, plates, knives, forks, spoons, glasses. And books. A lot of books. Probably around 500, and those were the ones that survived the pre-move cull.

After shoving bolts into shelves, I had a home for my modest library. With the boy off to sleep and the wife off doing something else, I dragged the very large Big Yellow Storage packing boxes around me, sliced them open and looked down at the paperbacks, hardbacks, pamphlets, first editions, the one hypertext I own (Patchwork Girl) and dissertations, then thought how am I going to arrange these? Dewey decimal? ISBC? Alphabetical? I’m no librarian, plus I’d be packing them up again in two or three years time so I opted for, er, random. They’d been packed in the boxes according to their size. I started grabbing fistfuls of paperbacks and bunging them onto the shelves. I grabbed the bigger stuff to use as bookends.

I worked quickly, deliberately not thinking about what I was doing other than filling space. Near the end of this process, I started spine-gazing. Douglas Coupland’s Generation X found itself next to Roger Mellie’s Ad Break. The late Nicholas Schaffner’s Pink Floyd biog Saucerful Of Secrets sat beside Harry Grey’s Once Upon A Time In America (originally published as The Hoods). Emily Bronte side by side with Martin Amis amused me for some reason, while Leo Marks’s Between Silk And Cyanide seems strangely at home paired with a pamphlet on The Humanist Philosophy.

My random grabbings put Alexander McCall Smith’s Tears For The Giraffe appropriately next to the 1939 edition of Faber’s compendium My Best Detective Story. Three interesting books lined together on my top shelf are Pat Barker’s Regeneration trilogy, Roger Lewis’s brief but illuminating Charles Hawtrey biog The Man Who Was Private Widdle, with Iain Sinclair’s splendid psychogeographic exploration of London, Lights Out For The Territory.

Elsewhere, Come Play With Me, The Life And Films Of Mary Millington snuggles beside a first 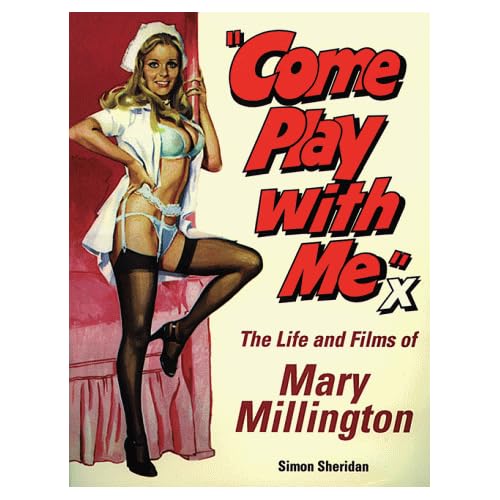 Where To Find It In The Bible tries to edge out Bruce Campbell’s memoir If Chins Could Kill, Confessions Of A B-Movie Actor.

Wodehouse and Graham Greene seem in good company with The Inimitable Jeeves and The Confidential Agent exchanging pleasantries from the past next to one another.

The Poe Cinema is next to the Bible – what would God think of that?
Poe is quite a tall book, like many of my film books. Most of these have found themselves together – must have been a packing thing so in the top right area of my shelf space, there is a small degree of order.

The last chance arrangement that seems to have some unspecified resonance for me is David Weddle’s Sam Peckinpah biography (If They Move… Kill’Em!) adjacent to Nick Hornby’s Fever Pitch – perhaps intensity?

There’s no shelf space left now. I am reduced to stacking book upon book and two deep on the bigger shelves. Don’t get me started on those.