Image via WikipediaTHE MILD hysteria about Google photographing places at street level to enhance their mapping service might have spread to Denmark.

Well, it will if I have anything to do with it.

I was bumbling down the E55 towards Copenhagen yesterday afternoon when I spied a suspicious looking vehicle going far too slow. After spitting forth bile at the driver’s poor ability, I noted a strange looking device atop the car.

I resolved to find out. I flicked an indicator drifted into the outside line and whizzed past the snail of a car, getting a good look at the strange, rotating and yes, camera-like device on its roof. I then returned to the inside lane and waited for the roving camera car to catch up. My speed dropped, 110km, 90km, finally 60km – a dangerous speed to cruise at on any motorway, and let me tell you, my pulse was racing, sweat silvering on my forehead as I diced with death and investigated The Man, watching as he came ever closer behind me.

Checkmate. My phone ready, as he passed and dropped in front of me, I started snapping. Difficult with a mobile phone and one eye on the road.

But here’s where it gets weird, and all a bit Three Days of the Condor, Men In Black, or The Parallax View, depending on your view on conspiracies. See, as soon as I’d grabbed a few photos, the Google car (if indeed it was that) took off. And I mean really took off. The guy floored it and shot ahead so quickly, I lost him in the traffic that thickens as you approach the Copenhagen outskirts.

Had he seen me taking pictures? And did he see my licence plate? And who are the big goons standing in my office right now erasing my Nokia’s contents?

Or maybe the car was nothing to do with Google, and it was doing
something entirely innocent. Here are the pictures. I’ll let you decide. Me? I’m reaching for my tin foil hat. 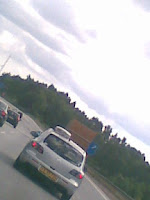 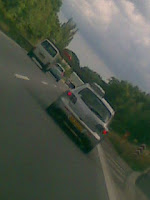 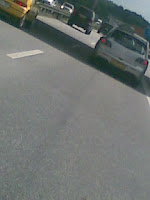