DROPPED the car off for its first ever service this morning and was walking back to the train station when I caught the aroma of cheap cigarettes. Not burning fags, no, but the slightly sickly smell you get when a fresh pack is opened – that unpleasant prelude to the always nice niff of a just lit one, which only last for a few seconds before it starts to cause gagging.

It was then I saw I was right next to the Danish HQ of British American Tobacco, and I thought, Christ, what must it be like working in there? (I might have once found out, sort of, when I applied to their London office years ago for a web editor job before coming to Denmark, but that’s not even another story so I’ll stop this digression forthwith.)

I carried on my way to the station when the following, mildy arresting image caught my eye. ‘Bilvask’ is the Danish for ‘carwash’: 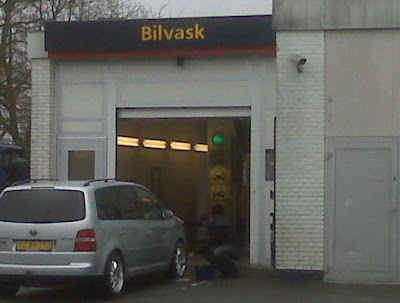 Quite why, then, the chappie was scrubbing away baffled me. Of course, I twigged it in a second. Kindly Danish petrol station owners give you a bucket and brush to get in to the tight spots on the wheels.

I myself have used a bilvask on two occasions. The first time, I noticed the previous user standing outside. I bought my ticket (impossibly digitised, the way techno-obsessed Denmark is – if they could find some way of frying an egg over a LAN network, they would) and asked if I stayed in the car or got out while it was being washed. The attendant shrugged and said either was ok. I drove my car in, shut the door and went to the control console where I had to scan this and pin-code that to start the wash. An Australian cyclyed by and explained he’d heard my conversation with the attendant and advised me to stay out of the car. “It’s starts up real quick, mate” he didn’t say (well, did, just not with the sterotypical embellishments). Sure enough, the water started spraying and a metal shutter door rolled down, sealing me off.

As a kid, I remember sitting in the car wash and loving it. So when I went the other week, I bought the boy with me, started the machine, ducked under the rolling shutter and slammed the door just as first suds hit the windscreen. We had a great time. I am 39 and he’s 3. A great father-son experience.

Beats crouching outside the bilvask with a brush.